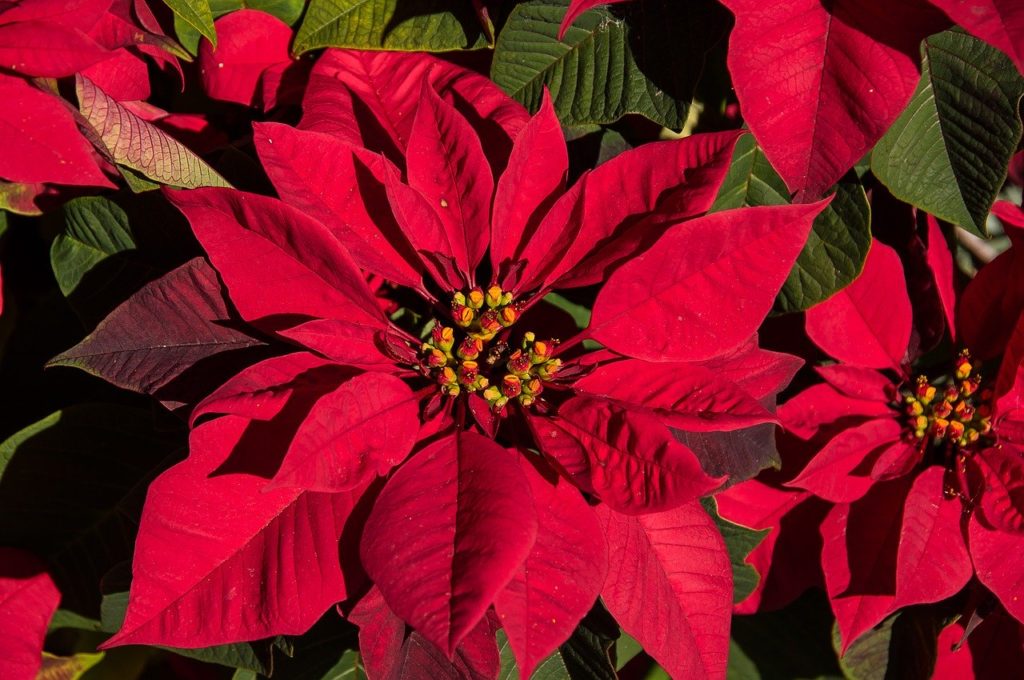 You won’t find a more iconic Christmas Flower than the bold, beautiful poinsettia! But did you know why the Poinsettia has become the most famous Christmas flower of all? The story goes… There was once a poor Mexican girl called Pepita who had no present to give the the baby Jesus at the Christmas Eve Services. As Pepita walked to the chapel, sadly, her cousin Pedro tried to cheer her up. ‘Pepita’, he said “I’m sure that even the smallest gift, given by someone who loves him will make Jesus Happy.” Pepita didn’t know what she could give, so she picked a small handful of weeds from the roadside and made them into a a small bouquet. She felt embarrassed because she could only give this small present to Jesus. As she walked through the chapel to the altar, she remembered what Pedro had said. She began to feel better, knelt down and put the bouquet at the bottom of the nativity scene. Suddenly, the bouquet of weeds burst into bright red flowers, and everyone who saw them were sure they had seen a miracle. From that day on, the bright red flowers were known as the ‘Flores de Noche Buena’, or ‘Flowers of the Holy Night’. The shape of the poinsettia flower and leaves are sometimes thought as a symbol of the Star of Bethlehem which led the Wise Men to Jesus. The red colored leaves symbolize the blood of Christ. The white leaves represent his purity. And now you know why Poinsettias are the most famous Christmas Flowers of all!

For most people, the Fourth of July is synonymous with colorful fireworks, picnics, barbecues, and pool parties alongside friends and family. Patriotic steamers and white flags are often a staple on Fourth of July celebrations and decorations. What better way to display your patriotic pride by going out of your way to add beautiful flower arrangements to your decorations?

Flower arrangements for the Fourth of July

Whether you are holding a formal or informal event, patriotic floral centerpieces are guaranteed to brighten up the occasion. You can opt for ready-made flower arrangements which feature red, blue, and white or you can opt to DIY. Should you decide on the latter, you can use red or white tulips, daisies, carnations, lilies, or roses. Blue flowers are quite hard to come by, but you can use hydrangea, periwinkle, and morning glory, and bluebells. Alternatively, you can use blue ribbons or a blue flower vase.

Where to use your flower arrangements

Some of the places where you can add your Fourth of July flower arrangements include:

Caring for your flower arrangement in the hot, humid weather

How long your flower arrangement lasts depends on how healthy they were at the time of purchasing or cutting them, how they are stored, and how well you care for them.  If you’ve bought your flowers a few days prior to the Fourth of July event, consider using floral preservatives that fight harmful bacteria. Re-cut the flowers’ stems before you putting them in water. This allows the flowers to hydrate afresh. Make sure you change the water you immerse your flower stems in daily. Also, consider arranging the flowers in a clear vase so that you can easily monitor their stems’ health. If you are not in a position to put them in a jar of water right away, store them in a cool place. Do not leave them in a hot car.

Luckily, premade arrangements which are provided in containers or baskets have a floral foam which holds the flower stems in place. The foam is designed to take after the flower stems’ cellular structure; it absorbs water which is absorbed through the stem to keep the flowers fresh and hydrated. In this case, you do not need to recut the stems. When pouring water on the foam, water from the foam’s edge to enable it to soak it up as it should.

History of Flowers and Thanksgiving

You may have been told the history of Thanksgiving before, and you will agree with me that it is one worth sharing again and again. Experts estimate the first Thanksgiving to 1621 when religious refugees from England (referred to as the Pilgrims) extended an invitation to the neighboring native Indians (the local Wampanoag tribe) to feast with them after a fruitful harvest at the Plymouth Plantation in Massachusetts. It is worth noting that the Pilgrims believe that such a bountiful harvest calls for merriment as it is never an obvious thing. Thanksgiving feast lasted three days—people loved to party “hard” during that period.

Just as before, Thanksgiving Day is still all about feasting with family and friends, and being thankful for a bountiful harvest, which may be literally or figuratively. The introduction of flowers makes Thanksgiving a very special holiday. In addition to transforming your table and home into a masterpiece, flowers make perfect thoughtful Thanksgiving gifts. As with all kinds of special occasions, flowers make Thanksgiving more unforgettable and beautiful. In fact, the Thanksgiving table is incomplete without a gorgeous fall-inspired floral centerpiece or cornucopia (horn of plenty) in orange, red, burgundy, and yellow—the colors of autumn. Aside from transforming your home or your tablescape into a masterpiece, they also make tasteful and thoughtful Thanksgiving hottest gifts. If the Thanksgiving centerpiece is harvest-inspired, people incorporate edible arrangements with berries, vegetables, or fruits.

Flower of the Month December: Stargazer

One of the most stunning and perhaps most celebrated lily varieties is the star gazer lily. Known for its striking blooms and heavenly scent, the stargazer is a fantastic choice for a number of occasions. Stargazer lilies are young, bold, beautiful, and dramatic. The meaning of these fragrant flowers can be one of wealth, prosperity and ambition, but their white variety can genuinely express purity and sympathy.

Some fun facts about them:

Roses come in different varieties mainly spray roses, shrub roses and single roses. A spray rose is smaller and miniature version of common rose. Spray roses can be used in many different ways. One of the most popular ways is in corsages and boutonnieres. These are the perfect size for this. They can also be used in floral arrangements with their full stem. The Peach spray rose symbolizes Desire and fascination.

Some Facts about Spray Roses: